A Few Accomplishments of Haile Sellassie I for Ethiopia 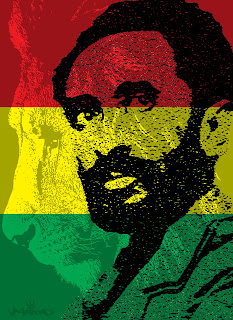 The following is a short list of works or accomplishments of the Emperor Haile Sellassie I, as He served Ethiopia as Ras, Regent, Crown Prince and Emperor. They are not listed in chronological order. This list is not definitive, it was compiled from my notes while reading Indrias Getachew's "Beyond the Throne."

1. The Emperor was known as the Architect of Modern Ethiopia, He ruled in total for close to sixty years, fostering growth, development and peace.

2. During the 1920s-1930s He modernized and centralized the government by uniform administration, legal codes, and by appointing "educated elite."

3. Reshaped and re-equipped the Ethiopian army and police, with modern training and weaponry.

4. Introduced capitalistic agriculture  with crops such as coffee, oilseeds and cereal, traded in the Middle East. This developed export economy to provide for developmental goals in other sectors before and after the war.

5. Created a sustainable national economy to improve the standard of living overall.

6. Introduced modern communications to unite the country and travel, such as phones, trains and planes.

9. Introduced modern education taught in the many schools built across the nation, bought printing presses. Models from Europe and America were adapted, and students were granted scholarships overseas to study. The Emperor was an advocate of higher education. He was the titular Minister of Education and Chairman of intergovernmental Board of Education. He visited students often to observe their studies and inquire after their daily care and well being. He formed a strong paternal bond with those who would become the foundation of government, His educated elite.

11. Got Ethiopia admitted into the League of Nations in 1924.

12. Liberated the Ethiopian Orthodox Church from the Coptic Church at Alexandria, where bishops were appointed from and by Ethiopian priests rather than the Egyptian Coptic priesthood.

13. Defended the sovereignty of Ethiopia by rallying an army to fight off the Italians.

14. Ensured that Ethiopia gained the respect, investment and attention that it needed in order to modernize, all while keeping colonizers from overstepping on her borders.