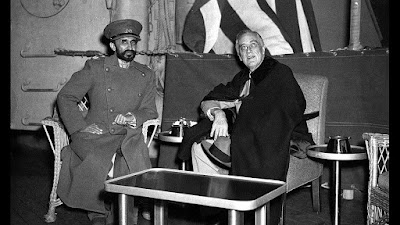 The international post World War II climate ensured a decline in European influence, especially for Britain and France. These two countries had notoriously impacted heavily on Ethiopian politics and caused Emperor Haile Sellassie I a fair share of difficulties. After World War II the United States of America emerged on top, dominating political, economic and military platforms. The Soviet Union also held a place with its powerful military resources.

Emperor Haile Sellassie’s ability to modernize and develop from the 1940s onward, was in large part due to an alliance made between Ethiopia and America. In 1943 He sent a mission to seek military, legal and financial advisors which was successful. The mission was able to secure a loan from the US which allowed Ethiopia to establish its own local currency.  This was most necessary because Britain had tried to phase out the Maria Theresa thaler and replace it with the East African shilling. Ethiopian farmers – as major exporters of grain to post war countries – refused to accept the change as their market dealt with the thaler, and as a result the shilling was devalued. To solve this conflict, a local Ethiopia currency was the only viable solution, and with its introduction the Birr contributed to securing Ethiopia’s independence from Britain.

In 1945 the Emperor met with President Franklin Roosevelt in Egypt. There He granted the Americans the rights to search for petroleum in the Ogaden region. This was another step for Ethiopia’s reclamation of the Ogaden from the British.

Ethiopia was able to return aid to America in the form of communications. The Italians during their illegal occupation, had set up a communications centre in Asmara, Radio Marina, which the US military found to be quite useful. This centre was a key initiative in US support for the return of Eritrea to Ethiopia.

THe Ethiopian -American alliance also saw the birth of Ethiopian Airlines. In 1945 Ethiopia signed a contract with America’s Transcontinental and Western Airline (TWA) which transformed Ethiopian life significantly. This new form of domestic travel changed the game for Ethiopian communications and trade, improving the standard of living for locals. Ethiopian Airlines gave Ethiopia a leg-up on the continent as well, solidifying its influence in diplomatic affairs and connecting Afrikan governments.

Ethiopia sent a battalion to fight in the Korean War in the 1950s. This was a move that showed their loyalty to the United Nations’ mandate for collective security and to also flex their new military expertise and resources – which they lacked back in the 1930s. Ethiopia’s top performance in this war secured their claim for Eritrea as it gained the support of the UN.

Unrest in the Middle East during this decade also strengthened the alliance with America. THe Egyptian Revolution of 1952 saw the rise of anti-American Gamal Abdel Nasser. Because the Red Sea corridor was dominated by Arabs, Ethiopia became the only port access and all for the US, which they needed in order for their petroleum trade. America was a supporter of Israeli independence and national security, so its ability to rely on Ethiopia was a boon in the hostile Arabic Red Sea region.
America’s aid to Ethiopia was the greatest on the Afrikan continent. They signed the Point Four Program in 1952 which focused on public administration and health, education and locust control. The Imperial Highway Authority was created to build and maintain roadways. Telecommunication facilities expanded and while Sweden provided the equipment and expertise, America handled the administration.

The need to replace the skilled and educated workforce in Ethiopia was one of the most important tasks of the post-liberation period. Numerous schools and training centres were opened all over Ethiopia and Eritrea. The American model was used and American found employment as teachers. Many Ethiopian students were sent abroad to Britain and North America for higher studies and this exposure introduced young Ethiopians to “radical” developments in politics around the world which directly impacted how they viewed their Ethiopian homeland. Such students became eager to see changes happen and brought their “left-wing radicalism of campus politics to Ethiopia.”

“With the advent of the American Peace Corps program in the 1960s, the youth education program in Ethiopia received an additional boost. (There are varying opinions regarding the ideological effect that these Peace Corps teachers had on their Ethiopian students. It has been suggested that the teachers, recent graduates from American universities, were themselves steeped in the radical politics of the American student movement, and that they played a major part in influencing Ethiopian students’ radicalization.) American influence in education went beyond the high school level and was significant in the various colleges, as well as in the Haile Selassie I University, whose academic system was based on the American educational model. This ubiquitous American presence would later be pointed to as one example of American imperialist penetration in Ethiopia.” Beyond the Throne 2001 Indrias Getachew, pg 127