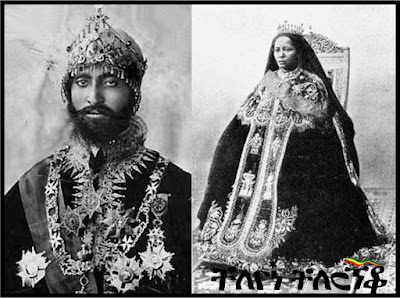 The Emperor of Ethiopia is dubbed the “King of Kings” because he is the supreme ruler over all the chiefs or kings of provinces within Ethiopia. These kings of constituent states within Ethiopia (and Eritrea) were called by the title of “Negus” which means in ancient Ge’ez, “to reign.” To be named and crowned Negus of Shewa was of particular importance in the antiquity of Ethiopia, for this region was a capital for the royal House of Solomon/Menelek I, second to Gondar; and functioned autonomously for centuries. It is an abundantly rich and fertile region, in the very centre or heart of Ethiopia, and even partly borders the River Nile. Learning the Istory of King Tafari, many RasTafari are familiar with the towns of Debre Berhan, Ankober and Entoto which in addition to Addis Abeba were once capitals of Shewa.

Shewa is noted to have been a welfare state. It is divided with mainly Amhara Christians and Muslims in the North, but Oromo and Muslims in the South. In the oldest of histories, it was a part of Aksum before it was captured by Muslims.  Shewa was the junior line of ascendancy, a branch of the paternal line of emperors which was rooted in Gondar. Emperor Menelek II was the last emperor under the paternal line of Shewa. Only the paternal line was supposed to ascend the throne, but this rule was often not followed in the 1700s and 1800s, where rulers proclaimed themselves with the majority backing of the nobility and church rather than by being legitimate heirs (hence why the traditional belief in direct succession from Solomon to Haile Sellassie is unfortunately questionable and unfounded in historical fact).

Menelek II was King of Shewa and transferred that title to Emperor of Ethiopia when he proclaimed himself ruler over the entire country. He had seized the throne from the son of his rival Kassai, who had the Abuna crown him Negusa Negast Yohannes. Menelek II built and made Addis Abeba the capital of Shewa and of the monarchy.  Ras Tafari was the last man of the family of Sahle Sellassie to be named Negus of Shewa. This happened when He was 37 years old on September 7th 1928, and He was the first Regent to be given the title under the ruling Emperor/Empress. He also named His firstborn son Asfa Wossen Meridasmach, which means "Fearsome Commander.” This was a title only given to the Ruler of Shewa in the days before Emperor Sahle Sellassie, but when Sahle came into power, on personal preference, he changed it to Negus of Shewa. Therefore, only the descendants of Sahle Sellassie were named Negus of Shewa.

Ras Tafari was granted this title Negus not on the freewill of the Empress, or by seizing the title for Himself as did His predecessors; but because of His popularity among the progressive members of the ruling class, and because it was the best way to avoid bloodshed between the conservatives and progressives. The Empress Zawditu was basically obliged to grant Him this title because of an event dubbed the “Palace Revolt,” and because of an interaction between Him and an aristocrat named Dejazmach Balcha of Sidamo.

When Tafari was named Regent, taking over the position after the death of Habte Giyorgis in 1926, He of course assumed the majority of the ruling duties, and was therefore constantly in the public eye, dealing with the people on a daily basis. Along with His wife Princess Menen He created a lot of new infrastructures based on European models. Printing presses for newspapers and books, telephones and roads were installed at the capital. People started to rise up in socio-economic class, because of booming trade with countries such as Japan, America and India. The Regent and His Wife encouraged nobles in other parts of the country to build schools in their towns, to which Princess Menen’s mother Woyzero Sehin Mikael, obliged.

From Sandford’s and Parnell’s accounts, through Prince Tafari’s administration, He and His wife became quite popular and respected by the nobility who were supportive of continuing Menelek II’s works for Ethiopian progress. Those who supported the traditional feudal system and who did not like all the foreigners Tafari brought to live and work in Abyssinia, nor the changes of society with the increase of wealth; gathered around the reclusive Empress Zauditu. They didn’t want Tafari to get too close to the throne.
Rumours and biased opinions against Ras Tafari came to Zauditu’s ear, a conspiracy to have Him deposed as Regent was in full swing.  There was even a plan to assassinate the Crown Prince, which was luckily thwarted as His spies informed Tafari of the plan.
In 1927 Ras Tafari summoned the various Rases and lords to Addis Abeba to feast and renew their fealty to him and the crown. Most of them came except for one who did not want to bow before a man he despised. Dejazmatch Balcha was one of the feudal lords who did not like the booming growth of the central government in Shewa. The rise of Shewa caused the power of the provincial leaders such as Balcha to decline. While they themselves grew wealthy and were able to modernize their provinces due to the administration and tax reforms implemented by Tafari, they did not like the fact that they now had to pay generous taxes to Shewa – to Ras Tafari.
Furthermore, if peasants made complaints that their lords were abusing their station, and were exploiting and cheating their labour force, the lords were required to appear before the Crown Prince for a meeting to discuss such complaints. Dej. Balcha was one such lord called to Addis Abeba, especially after he did not appear to swear his loyalty to the Regent. And he continuously refused to heed to the call which only made the usually patient Crown Prince and Regent, irate. At this point Empress Zauditu’s health was failing due to diabetes and liver complications so she was not in a position to protest against the Regent’s new government policies. This led Balcha to challenge Tafari’s new economy and authority.
It is noted that Balcha finally showed up on the 11th February 1928 with five thousand troops. He had been invited to attend a feast in his honour hosted by Tafari and Zauditu. He set up his camp and took six hundred men with him to go to the palace as protection. At the palace he made a spectacle of himself, as his men performed the traditional display of fukere, where they demonstrated their military prowess before the Regent and His own men.  Because Tafari's men did not respond to the boasting of Balcha's, Balcha and his soldiers believed that they had scared them into submission.
This was certainly not the case however, as when Balcha returned to his camp, he found that the rest of his men were missing. They had been disbanded by Regent Ras Tafari's orders while Ras Balcha was at dinner showing off. With this embarrassment, Balcha sent the remainder of his soldiers back home to Sidamo, and sought sanctuary at St. Raguel Church in Entoto. However, Tafari's men laid siege to the Church and Balcha was officially stripped of office. He lived as a monk until 1935. The remaining property of Balcha’s was redistributed to the loyalists on the Council of State who had replaced the old conservatives.
Balcha was quoted as saying "do not underestimate the power of Tafari. He creeps like a mouse but he has jaws like a lion." Beyond the Throne page 66
Seeing this take place, it became obvious to all that Zauditu was no longer in power, and that the power of the government was solely Ras Tafari Makonnen. Harold Marcus states that she should have supported Balcha as he had expected in February, if she wanted to maintain the appearance of power, but Zauditu waited until August-September to protest the Regent’s rule, on the matter of the Italo-Ethiopian treaty for the road to be built from Assab to Dessie.
On September 5th, with the conservative nobles of the cabinet, the empress summoned her cousin to her father’s main palace, the Big Ghibbi, where all official business was conducted. As soon as Ras Tafari entered the palace, the doors and gates were barricaded with armed palace guards. He sat with the empress and she questioned Him about His secret plans to overthrow her reign. Along with her retinue she accused the Regent of undermining her authority and trying to steal the crown.

The main accusation against the Regent was the treaty signed with Italy allowing them to build a road from Asab to Dessie. The empress had reluctantly signed it, but she continuously let it be known to her cousin that she was not happy about His foreign relations – it just wasn’t the “Ethiopian Way.” This access road would greatly reduce Ethiopia’s own tradition and natural defenses against the likes of invaders. Though this statement became true in the end, the invasion would have likely happened regardless. At least King Tafari knew the importance of keeping the enemy closer. If He had not been ruling at the time and keeping tabs on Europe via the League of Nations, Ethiopia would have been at a sore disadvantage when Italy invaded.
Dejazmatch Beru and Ligaba Beyene, the Empress named as her two allies that claimed Tafari wanted her gone.  The Regent, in anger, ordered the two men to be arrested for spreading such lies. Beru ran to Menelik II’s mausoleum with his troops and Tafari and His own troops followed and surrounded them, only to then, in turn, be surrounded by Beyene’s men. Denying all claims to His sedition against the crown and the country, Tafari stood strong before the disapproving faces of the crown council, those who did not share His vision for Ethiopia.
In another account of that day it is said:
"Disposing scornfully of such allegations of disloyalty, Ras Tafari maintained complete self-possession in the face of the threatening soldiers of the palace guard. Ordering the great doors of the ghibbi to be thrown open he passed out and down the steps of the assembly hall. The force of his personality held the crowd." (Sandford 2009, page 52)

Hearing of what was happening at the palace, Princess Menen gathered her husband’s own soldiers, equipping them with whatever weapons She could find, and arrived with a tank bursting through the gates, to rescue Her husband. This led to a “hold-up” between the Regent’s own bodyguard and tank, with the Empress’ palace officers. By the next day priests came to intervene and end the stand-off. It was clear who had the upper-hand in the situation as well. With a calm and silent sweep onto His mule, surrounded by His loyal supporters, Ras Tafari rode back to His home.
Witnessing the entire “trial,” and being thoroughly impressed by the maturity of the Regent, later, on September 19th the progressive nobility insisted the Empress crown the Ras as Negus of Shewa. She asked for time to think about the request, while the Regent told her to deny it since a king and queen couldn’t rule in the same city. On the 22nd Empress Zauditu proclaimed the Ras His Majesty Negus Tafari of Shewa; and on the 7th October 1928 the crown was bestowed. At the Church of the Trinity, the ceremony was held in great joy and pomp, reinforcing to the traditionalists/conservatives that there was soon going to be a shift in power. Princess Menen became Itege, or Queen Menen, meaning “the King’s Consort.” 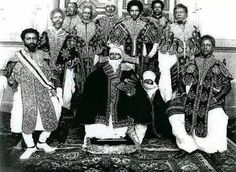 Young Tafari on the left with Empress Zawditu in the centre
Posted by Ila Addis at 08:40