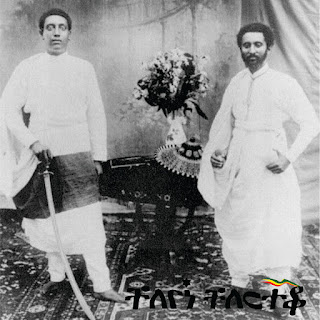 In the crowning as Ras, I-Majesty was triple crowned as well because He received three titles and new offices, as Ras, Crown Prince (Heir) and Regent Plenipotentiary.  As Ras He reclaimed His governorship of Harar (but also possessed the governorate of Sidamo), being His childhood home and governorship of His father Ras Makonnen. As Crown Prince He was named the legitimate heir to the throne of Solomon; and as Regent Plenipotentiary (Balemulu Enderase) He was also responsible for running the country behind the face of the newly appointed Empress Zauditu. He was therefore the true leader of the country’s affairs and ceremonially the second most important person after her.

Dejazmatch Tafari was awarded these three titles, not just because He had proven Himself a worthy and progressive leader of the Ethiopian people; but also due to the proclaimed heresy of Emperor Menelek II’s appointed Regent and heir, Lidj Yasu (Prince Joshua).  The misbehaviour of Lidj Yasu would prove a great obstacle Tafari had to overcome in securing His authority in Ethiopian governance, from Dejazmatch to Negusa Negast. It must be noted that while Tafari had His own visions of occupying the throne, He was not actually in the running to be an heir (nor did He proclaim Himself to be), for He had no family or supporters left besides Emperor Menelek before he died to nominate Him, since He claimed descent by maternal lineage. Empress Taitu had been determined to install her own family, of the male lineage of descent – Ras Gugsa, the husband of Menelek’s daughter Zauditu – above Yasu and Ras Bitwaded Tesemma, Menelek’s chosen pair to rule Ethiopia in his stead. It is by proving His worth that Tafari was able to achieve His goals.

Yasu had been appointed Regent by the Council of the State in1911, in accordance to his dying grandfather’s wishes. But from 1910-1916, it had become apparent that Lidj Yasu was forming social, economic and political ties with the Mohammedans (Muslims) of Turkey, Somalia and Ethiopia; which of course was vouched as a threat to the ruling Christian Solomonic nobility as well as the European allies Britain, France and Italy. Yasu declared he was a descendant of the Prophet Mahomed and went as far as to carry an Islamic Ethiopian flag, dress in turban and fashion his facial hair like the Muslim Danakil tribe. He even put away his Christian wife Romane Worq and took a harem of Muslim wives from the Afar and Oromo people. It must be noted however, that in all fairness, Yasu’s paternal lineage was of royal Muslim blood, in Wollo. His mother was a Christian and his father Mohammed Ali was obligated to convert to Christianity when given the title of Ras in 1875, because he married the daughter of a Christian ruler.

In 1916, things came to a head and it became apparent that Yasu was holding a grudge of some sort against his childhood friend and relative, Dejazmatch Tafari. It probably came as a surprise to many given that it was Yasu who arranged for Tafari to marry his niece Woyzero Menen (Menen by his family chart would have also shared the royal blood of Islam). Emperor Menelek II had placed his hopes in these two young men to follow after him and Ras Makonnen, with Tafari being the military and foreign affairs adviser. But the reality was that Yasu and Tafari had different ideas of how they would fulfill the emperor’s wishes. In the memoirs of Haile Sellassie I, He claimed that He and Yasu had together made a pact wherein He would be loyal to the prince, and Yasu in turn would not remove his “most potent rival”  from His post at Harar.

In May 1916, Lidj Yasu summoned Dejazmatch Tafari to the capital, Addis Abeba from Harar. Yasu ordered that Tafari was not to leave, and by June it was declared that Tafari was now the chief of another district called Kaffa. Yasu intended for Harar to become a “royal reserve”  with no replacement governor, which meant more control by the Muslims living there. Yasu therefore broke the treaty, and the transfer greatly upset the people of Harar who were loyal to the family of Ras Makonnen.

It also gave Tafari, being a man of integrity and loyalty, the freedom to retaliate without breaking the same vows. So instead of leaving for Kaffa, Tafari joined the traditionalists in Addis Abeba, who also did not want to see Ethiopia’s throne be overthrown by the Ottoman Empire and Muslim chiefs of the Horn of Afrika.  It must be remembered that at this time Ethiopia did not a have military furnished like the Europeans or Arabs and it would have been detrimental for them if Yasu had gotten into any wars.

In July to August, Yasu made trips that – according to the Crown Council and Orthodox Church – proved his intention to bring a Muslim uprising in Ethiopia and this caused the chiefs and priests to confront him, but he ignored them. His friendliness towards Muslims was offensive to the royal court and by September 27th, right in the very midst of the Meskel Feast, Abuna Mattheos sealed a proclamation that Lidj Yasu was excommunicated from the Church. He was deposed by the Council of State and Ethiopian Rases; and Zauditu, Menelek’s eldest daughter, placed as Empress (a woman was not the first choice but it had to be done). Tafari was promoted to Ras, Regent and Crown Prince at the age of 24.

The very next day, Ras Tafari then sent a telegram to Harar, ordering the chief there to arrest Yasu. Lidj Yasu, stationed in Tafari’s father’s palace, received the news and knew that his only allies were the Muslims he had gathered. But he forced the priests of Harar to swear they would banish anyone who went up against him and followed the orders that came from Addis Abeba. He then organized his own army and sent them out to meet the army coming from the capital to seize him at the very beginning of October. This army later deserted him and went over to Tafari’s side, as they knew they could not be saved from such treason. Yasu then in the cover of night, escaped, but his followers in Harar were not so lucky, and of them those who didn’t surrender were killed by Dejazmatch Balcha’s Shewan army. He had been sent from Addis Abeba to restore order in Harar, which he did.

While Lidj Yasu escaped to Danakil territory, his father, now called Negus Mikhail Wolde Giyorgis, of the Wollo Gallas (Yasu had elevated him from Ras to King of Wollo); decided he could not let this happen. He gathered his own army and marched against the Shewans, whom he was not fond of. With one victory achieved, he was ambushed and captured, and his son upon witnessing this demise, fled to the Eritrean border. Lidj Yasu would then move to the amba or fortress of Magdala where he was then found and held in captivity.  He later escaped but was recaptured in 1921, and sent into house arrest in Fiche, under the protection of Ras Kassa. Empress Zauditu took pity on her nephew, and since she was not allowed to have him live with her so as to reconvert him, ensured that he lived comfortably and had access to whatever he wished.

After the empress’s death in 1930, Yasu took the chance to escape imprisonment once again, but was quickly recaptured. This time the newly crowned Emperor Haile Sellassie I didn’t have to comply with Zauditu’s wishes, and sent him to another fortress under heavy guard. There is much more information available which accounts for the reckless behaviour of Yasu after his appointment as Regent, which give more credit to King Sellassie’s moves to keep him subdued. It was common for ruling kings to banish their rivals to ambas or fortresses in Ethiopia.

In 1935, during the Italian invasion, the Italians tried to get Ethiopians to turn against Emperor Haile Sellassie I, by declaring that Lidj Yasu or Emperor Yasu V was the true Emperor of Ethiopia (Yasu had never been crowned, only appointed heir and given a seal).  Yasu died in 1935, and it is claimed that Haile Sellassie ordered his execution to stop Italy from using him, there is however no proof of such. And so, the picture is clear that for Tafari, becoming Ras, Regent and Crown Prince was a victory won by defeating His childhood friend, His own cousin. The gates were now open to allow Ras Tafari to set His eyes on the throne.

It must be noted that as Regent, in His early to late thirties, Ras Tafari put in place the foundation for modernizing Ethiopia. He was met with resistance by the men who remained from Emperor Menelek’s government, because they feared His big ideas would eradicate their feudal reign; but still achieved the building of schools and a hospital; as well as entry into the League of Nations (which occurred eight years later on the 28th of September 1924 almost exactly to the date of Him becoming Ras). At the time in Ethiopia, Sandford notes that less than one percent of the population was literate, with a basic teaching of letters and numbers done by the priests of the Orthodox Church in villages. In addition to raising the quality of life in Ethiopia, to enter the League of Nations He also had to abolish slavery where it still existed in Ethiopia.


Special note:  Iyasu must be overstood as more of a radical personality than Tafari. While some may not agree with the way he conducted himself, he was noted to be intelligent and loved by many. His personality also did not give him much credibility as a monarch however. It was doubted whether he had the capacity to truly rule as Emperor. He likely had the vision of making everyone in Ethiopia equals, which threatened the ruling classes who needed their slaves; he was also said to have conspired to raise a Muslim army to overthrow both the Ethiopian government and the colonial powers taking up the Horn of Afrika. Asserate believes Iyasu has been maligned in history, that he was ahead of his time in wanting to create equal status between the Christians and Muslims, he also like Zauditu didn’t like the foreigners Britain, France or Italy. His policies were radical in the eyes of the Crown Council, but it could be argued that he was just trying to unite his people. If such is true, he certainly had a modern and credible approach to his role as emperor that I admire as well much like Tafari; though I believe he would not have properly  prepared Ethiopia to deal with the threat of Europe – mainly Italy – and fend off the colonization of the land in the footsteps of his grandfather. 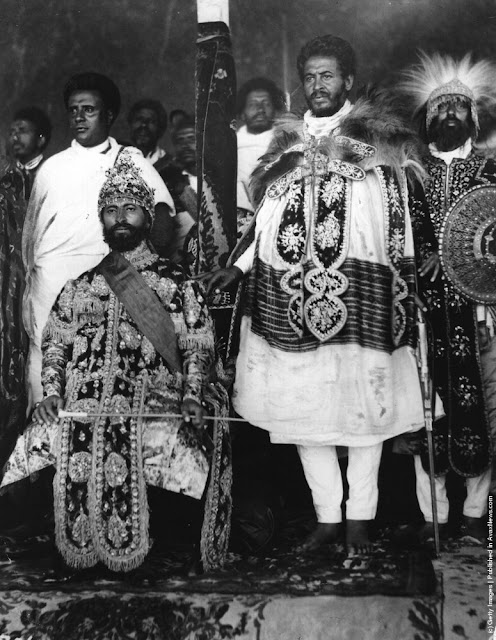