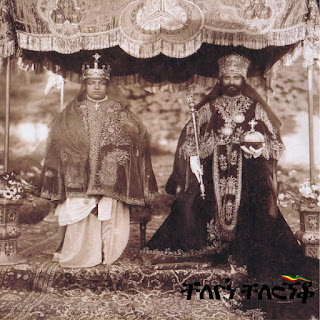 At the age of thirty-seven Negus Tafari Makonnen was crowned Negusa Negast Qedamawi Haile Sellassie, on November 2nd 1930. Emperors of Ethiopia did not use their family names when they ascended the throne, they chose a name that expressed their intentions as ruler. For example, Zera Yakob chose this name meaning “seed of Jacob” to express his ideas for religious reform. Sahle Mariam chose Menelik II in the honour of the first Judahite emperor of Ethiopia, the son of Solomon. Tafari Makonnen chose to use His baptismal name Haile Sellassie – Power of the Trinity.

It was also customary for the new emperor to be crowned immediately following the death of the previous emperor, before the death was publicly announced. But in the case of Haile Sellassie, His coronation followed sevenths months after Empress Zewditu’s passing. This was the first break from tradition that was employed in the coronation of Haile Sellassie. The crowning took place seven months later because the Emperor wanted to have a ceremony and celebration that included nations from other countries.

He used the seven months to fix up Addis Abeba, to pave streets and erect/repair structures that lined the main area of the city. Wooden arches lined with muslin were erected. He wanted the areas where the coronation would take place, which His special guests would see, to be presentable. He also installed telephone and electricity in the city. There was nothing done in the construction of the city that escaped the Emperor’s attention. He was on site to ensure that everything was in order. He also requested for special crowns to be made for the imperial family, as well as garments, including lion pelt/mane cloaks. The imperial bodyguard was given khaki uniforms as well. In addition to the crowns, the scepter, orb, robes and sword were also commissioned by the Emperor. The coronation coach was brought in from Berlin, its four white horses were brought from Vienna.

Unfortunately, none of the heads of state invited from the nations that had legations or consulates in Ethiopia, came to the coronation. Addis Abeba was too far off for them to bother with making the journey. Instead they sent envoys bearing gifts. The Emperor invited these dignitaries to prove to the Ethiopians that He was in fact accepted by Europe. He wanted to prove to the Europeans that Ethiopia was civilized in turn (however it is said that so many little quirks happened which did not satisfy the European standards so He did not exactly succeed in this endeavor.)

Duke of Gloucester came on behalf of the British Crown

Prince of Udine came for the King of Ital

Plenipotentiary ambassador Gerard came for the King of Belgium

Baron Bildt dtood in for the King of Sweden

Muhammed Tawfiq Nasim Pasha came for the King of Egypt

Governors from British and French Somaliland and Eritrea were also invited from the neighbouring colonies.

These guests were met by the Emperor or the Crown Prince when they arrived at the capital. They were each given a special envoy to escort them around. They were treated to a lavish, other-worldly extravaganza for two weeks.

The coronation started on November 1st with the unveiling of the statue of Emperor Menelik II in front of St. George Cathedral.

The Emperor and Empress then spent the entire night into November 2nd in a prayer vigil at the cathedral with the assembled priesthood that carried out chants and Ises in groups of seven. That night all the coronation regalia was also taken into the qedusa qedusan or the most holy inner sanctum of the Cathedral where they were blessed by Arch Bishop Kyrillios.

Seated upon the imperial chairs or baldachins, the Emperor and Empress were flanked by their sons Prince Makonnen and Crown Prince Asfa Wossen. The Emperor swore to respect the laws of the church and country and signed his name to seal His oath. He was presented with daggers, a sword, a scepter, orb, signet ring, two spears, a robe, a crown and the Ible. The Emperor’s head was anointed before the crown was finally placed on His head. Each item was present to the Emperor by one Abuna/Bishop and his attending Abbot, about nine in total. These priests represented churches from north, south, west, east and central Ethiopia. The Empress gained a ring, crown and scepter as well, after the Emperor. She was presented to the Archbishop by Her baptismal name Wolette Giorgis by Her Husband. The Emperor placed a crown on His son’s head which was a new feature in the age old tradition of the ceremony. This was to secure Asfa Wossen as the only successor.

After the official ceremony all the guests bowed down to the Imperial couple and the national anthem and a 101 gun salute followed. The royal pair returned to the Cathedral for Their first Holy Communion as Emperor and Empress.

After a parade of the new King and Queen through the streets of Addis Ababa, later there was a royal gala, or ceremonial coronation banquet. It was called the Geber, which was strictly for the Ethiopians. 24,000 dignitaries and soldiers were invited, and they feasted on raw meat with the Emperor and Empress in groups of 6,000. The coronation celebrations finally ended November 9th.