The Father of Education 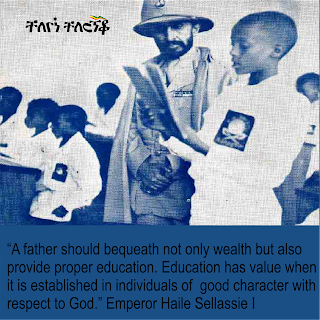 "A strong nation and a free nation can only base itself upon education."

Back when Haile Sellassie I was young, as Tafari Makonnen, He moved to Addis Abeba at His father’s dying request, to live at Emperor Menelik II’s court. Emperor Menelik had set up a school in his name for the young men who would attend his court and Tafari attended his school. Back then such education in foreign languages and new subjects, education was only for the male children of nobility. They were introduced to the European world essentially, so they could navigate the new world of trade and policy that was coming to their land. From a young boy and due to His training at Addis, Tafari had a profound love for learning and thought it should be available to all youth.

From the time Tafari Makonnen gained an opening to power, as a young man, He started His Education Campaign. He believed that education was the key to unifying and developing Ethiopia. From the early 1920s and onwards until the Emperor was deposed in the 1970s, He kept the Education Sector as His “baby.” It was His lifelong commitment and investment into Ethiopia’s future as a civilized and independent Afrikan state.

Haile Sellassie built schools from His own personal money when He could not raise sufficient funds, He did the same with hospitals and any other infrastructure that was needed in the land. His wife Empress Menen also established the Empress Menen School for Girls, introducing education to the population of girls first time. Girls of noble households were often taught a bit of Amharic by their family priests, but were never formally educated as a son could be. The Empress created handicraft schools, and girls in general were encouraged to be nurses and teachers outside of developing traditional crafting and trade skills.

The Emperor saw the educated youth as the future of Ethiopia. Education was a gift that would keep on giving in each generation, propelling Ethiopia to limitless greatness. The educated class would be the ones to take Ethiopia into the modern world. Learning from Europe the skills, languages and policies of the modern world was His way of raising the quality of life in Ethiopia to match that of any free country across the seas. He employed many Europeans and even Americans to teach His students, and He provided hundreds of scholarships for His special students to go abroad to further their skills. These young men and women were then expected to return to Ethiopia to render their talents for the sake of the nation. The Emperor didn’t stop there, he also offered at least one hundred scholarships to the children of other Afrikan nations to come study in Addis Abeba.

"The existence of a skilled and trained manpower is an absolute necessity for the progress and development of any country. "

"The salvation of our country Ethiopia, we have repeatedly stated to you, lies primarily in education. As Ethiopia is one, all Ethiopians are also one and education is the only way to maintain the condition."

"If women develop in education, they can overcome the natural weakness and serve their country as men do. it is our wish to assure the spread of education among all African People as much as among out own subjects."

The Emperor cared for His students as a father would his child. He daily checked in at a variety of schools and spoke to the teachers and students. He listened to what they needed, He ensured they were well taken care of, He encouraged them to work hard and to keep pushing forward. He was also known to have a impeccable memory – He never forgot a face and He remembered every detail about every child that crossed His path. He held each student accountable of his word, and expected them to fulfil their promises to Ethiopia.

According to Abebe Ambatchew in “A Glimpse of Greatness” the Emperor pushed for the expansion of education increasing the national enrollment to 5000 and the schools to 30 before the Ethio-Italian war. He lived to see the enrollment of a few thousand fro in 170-1971 to 795.0000 students, enrolled at 1520 government and 1304 non-government schools. Five thousand of those students attended post-secondary institutions. In light of the poor state of education when He began, the constraints of resources, absence of local teachers, and other challenges He faced, these figures reflect significant achievement.” Pg 19.

When Italy invaded Ethiopia, they killed almost the entire generation of young men and likely women, who were forming the working class of Ethiopia’s government. These students represented developed Ethiopia, and in their absence, a huge gap between the old and young was made, which debilitated the Emperor’s progress when He regained His kingdom from the 1940s onwards.

It was the students who in the end, joined with the working class youth, to also rise up against the monarchy in the 1960s to 1970s, and gave way for the Derg to seize power which led to a massive genocide and destruction of Ethiopia. It appears as though modernization had exposed the youth and educated working class to developmental ideals that were contrary to the institution of Monarchy. They wanted democratic rights and freedoms, and felt the Emperor was now outdated and holding them back. In the end, it was those the Emperor loved and cherished most, who turned against HIM and brought chaos to the growing pride of Afrika.
Posted by Ila Addis at 08:36