The Exile Ends: The Return to Afrika 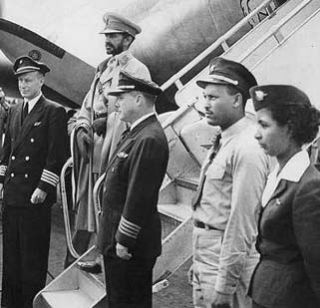 The Exile Ends: The Return to Afrika

“On 24 June 1940, a fortnight after Italy entered the Second World War as an ally of Hitler’s Germany, under conditions of great secrecy Haile Selassie boarded an RAF Sunderland flying boat in Plymouth, along with his second son, the Duke of Harar, and his two private secretaries Lorenzo Taezaz and Wolde-Giorgis Wolde-Yohannes. To preserve his anonymity, the Ethiopian emperor had been given the alias of ‘Mr. Smith.’

A night flight across Nazi-occupied France took the royal party to the island of Malta. There, they transferred to another flying boat bound for the Egyptian port of Alexandria. After spending a night at the Italian Yacht Club, recently commandeered by the British, the following day Haile Selassie was taken to Cairo to meet Edwin Chapman-Andrews as an old acquaintance of the emperor, having been British vice-consul in Harhar in the years immediately before the Italian invasion. From Cairo, ‘Mr.Smith’ flew on to Wadi Halfa in the Sudan.” Asfa Wossen Asserate, King of Kings pg 144.
The Emperor moved to an old British base in the Sudan, The Pink Palace, where He set up His team to plan His own moves to rally Ethiopians for offensive military action.

However, it was not to be an expeditious process. Upon arrival to the Sudan it became clear that there was no official plan in place to retake Ethiopia, compounded by the lack of arms, supplies and soldiers. British officers in the Sudan were also reluctant to give aid because they feared Italian reaction from the east of the border.

The other issue was the fact that Britain didn’t want to acknowledge the Emperor as the Head of the forces that would lead to the reclamation of Addis Abeba – which was obviously because British had its own secret agenda to divide Ethiopia up for itself after subduing the Italians. After many months of waiting, after numerous false starts, the Emperor’s faction, Gideon Force, finally made its move, crossing the Ethiopian border in January 1940 at Omedla. An account of this process can be found in the memoir, “Chapman Andrews and the Emperor.”

On the 24th of July 1940, a day after His own birthday, Haile Sellassie issued a proclamation of amnesty. He required Italians and Ethiopians alike to put down their arms:

“I announce to you that I advised the Italians in Ethiopia and who were completely encircled to submit to our Chiefs in order to avoid being killed. Consequently, I recommend to you to receive in a suitable manner and to keep all the Italians who submit to you with or without arms. Do not reproach them for their atrocities to which they have subjected our population. Show them that you are soldiers possessing human feelings and a human heart. Do not forget that during the Battle of adwa, the valiant Ethiopian warriors who had handed over the Italian prisoners to their Emperor have increased the honor and elevated the name of Ethiopia…


When I order you to respect all these things it is only to ask you to perform an act of conscience, because my heart tells me that the Ethiopian people is not unfair to any other civilized people in their respect for the laws of war.” Beyond the Throne by Indrias Getachew  pg 105-6


The Emperor then reiterated this request on May 5th 1941 in His Victory Day speech.

It was a very important move for the Emperor to make, as if He had sanctioned a retaliation against the Ethiopians, the world stage would have views Ethiopia as beasts and further military action from Europe would have surely followed. Despite the crimes of Italy against Ethiopia, and Ethiopian suffering for many years under their occupation, the Emperor would have been made into the villain.

The principle of forgiveness extended beyond the Italian enemies to the rivalries amongst the Ethiopian peoples as well, given that the occupiers had tried to force North and South to hate one another. There were many Ethiopians who were swayed by the Italians and who carried out orders to kill their own people, castrate young males and raze villages. The Emperor’s request for amnesty was to prevent them from inflicting further abuse, but to also prevent the surviving victims from retaliating in vengeance.

Email ThisBlogThis!Share to TwitterShare to FacebookShare to Pinterest
Labels: Haile Sellassie I, return to Africa from exile