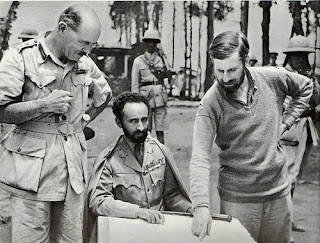 British solider, Major Orde Wingate was appointed to lead Gideon Force, the small unit of barely over 1000 men, that would secure the Emperor of Ethiopia’s return into Ethiopia for the recapturing of Addis Abeba. Wingate graduated from the Royal Military Academy at Woolich in Britain, he led armies in the Sudan and Palestine in the 1920s and 30s. In Palestine he was drawn to Zionism and it was from his dream of being Jerusalem’s liberator that he came up with the name Gideon Force for the Emperor’s guerilla unit.

Even though Winston Churchill had made it clear that the Emperor was to be returned to his region, the Anglo-Sudanese had previously made no moves to help the Emperor rally His own forces to enter Ethiopia, because they didn’t want to stir up Italy to strike against them, nor spend the resources they needed for their own military. They also, as colonizers, planned to take all Italian territories, including Ethiopia for British occupation instead. So they saw no great hurry in helping an emperor who had already been displaced from rule. Upon his arrival in Khartoum, Wingate made it clear that he was of another opinion entirely. He made the following address to Haile Sellassie I professing his loyalty to the Son of Solomon. He was awed to serve the descendant of the Biblical dynasty:

“I bring you most respectful greetings, Sire. In 1935 fifty-two nations let you and your country down. That act of aggression led to this war. It shall be the first to be avenged. I come as adviser to you and the forces that will take you back to your country and your throne. we offer you freedom and an equal place among the nations. but it will be no sort of place if you have no share in your own liberation. You will take the leading part in what is to come.” Asserate, King of Kings pg 148

Wingate was known to be a bit of a radical – called an ‘idiosyncratic character,’ ‘idealist’ and ‘fanatic.’ He didn’t like to bathe and basically marched to the beat of his own drum. We can say that his strong sense of self-esteem, knowledge and confidence in his military skill was what made him the best man to work with the Emperor. Haile Sellassie I needed someone who believed 100% in His cause, someone who would do what it took to achieve victory. The two became instant trusting friends.

“Give me a small fighting force of first-cass men, and from the core of Ethiopia I will eat into the Italian apple and turn it so rotten that it will drop into our hands.” Asserate, King of Kings pg 149
Posted by Ila Addis at 13:03