The Wal Wal Incident - Why the Italo Ethiopian War Started 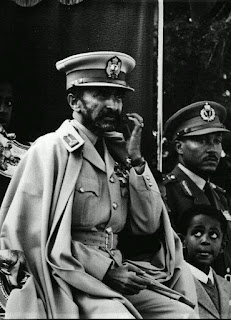 At the request of Regent Ras Tafari Makonnen, in 1923 Italy agreed with France to enter Ethiopia into the League of Nations (LON). By 1925 the Fascist regime was established, with Benito Mussolini rapidly gaining power. In 1926 Great Britain and Italy made an agreement that Italy would be granted a zone of economic influence in the Eastern horn of Afrika in exchange for Italy’s promise not to interfere with the waters of the Nile that flow from Ethiopia, which Britain monopolized. Italy would have their railway and Britain their waterway.

Ethiopia knew of this exchange because all correspondents between LON member states were open for all to view. The Regent of Ethiopia was shocked and appalled and immediately sent notes of protest to both Great Britain and Italy through the LON. How could they make such a decision that involved Ethiopia, without the country's involvement?

In 1928 the Regent Tafari signed with Italy a twenty year friendship treaty where Ethiopia gained a free-zone at the Port of Assab on the Eritrean coast which was an Italian territory. A road would be constructed to link Ethiopia’s Dessie to Assab. The signatories Ethiopia and Italy agreed to build the road in their respective countries. An Italo-Ethiopian company would have monopoly on the road traffic.

This agreement however caused a lot of disagreement. The Ethiopians did not want to allow Italian engineers into Ethiopia and the Italians wouldn’t allow Ethiopia’s appointed Dutch engineers to give their plans for the road. A lot of mistrust and arguing ensued. Between 1930-35 Italy made a series of complaints against Ethiopia about border raids. They kept harassing Ethiopia during this time but the Emperor remained calm and trusted in the treaties signed with Italy and the LON.

In 1930 Italy built a garrison or fort at the Wal Wal/Ogaden Oasis at the Ethiopian-Somaliland border, but this garrison went over onto Ethiopian territory by 60 miles. The Italians stationed Somali Ascari or fighters as their frontier troops. In November of 1934, Ethiopian border troops were accompanying the Anglo-Ethiopian Boundary Commission on a survey, when the infringement was discovered. They voiced their outrage to the Italians and Somalis at the frontier. The British in the party fled the area to avoid upsetting Italy and becoming involved in the argument. But the Ethiopian troops stayed and set up camp alongside the Ascaris.

On December 6th the Wal Wal Incident happened – the two sides finally clashed. 110-150 Ethiopians died, while only 30-50 Italians and Somalis perished. The Italians had in fact planned this skirmish after seeing that the Ethiopian troops would not leave the area. They brought in planes to bomb the frontier, and 3 armored vehicles with machine guns.

The Ethiopian Government requested that the disagreement be settled by arbitration but Italy’s government rejected the proposition, demanding compensation instead. On January 3rd 1935 the Ethiopian Government submitted a report on the incident to the LON under Article II of the Covenant. The League Council agreed on the arbitration because of the Italo-Ethiopian treaty of 1928, but delayed the application until the next meeting which was months ahead.

Italy also disagreed that an assessment on the location of the garrison should be done to prove that they were in fact on Ethiopian territory. But Ethiopia insisted that the placement of the fort needed to be known in determining which country was at fault; and before they were forced to pay any form of compensation to Italy.

When the Commission of Arbitration finally met on June 25th the Italians still refused to allow their garrison’s location on the frontier to be questioned. Because the arbitration could reach nowhere, the LON decided an independent chairman should be appointed to the Committee. On September 3rd the chairman ruled that neither party was to blame for the incident.

But this ruling by that time was of no concern to Ethiopia or Italy, because the war was already on the horizon. The Emperor Haile Sellassie I did all He could to get the LON to intervene, but they didn’t. The LON failed to exercise their power by not stopping Italy from property violation, and by not helping Ethiopia settle the conflict in a reasonable time frame.

Sources: The Lion of Judah Hath Prevailed by Christine Sandford, The Second Italo-Ethiopian War Wikipedia
Posted by Ila Addis at 08:14