The Marriage of Dejazmatch Tafari Makonnen and Woyzero Menen Asfaw 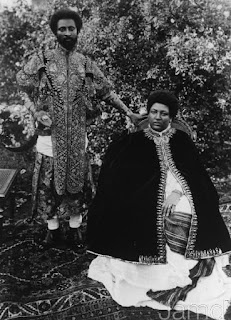 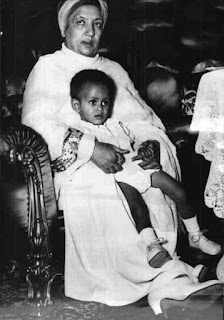 Dejazmatch Tafari Makonnen at a young age was first married briefly to Woyzero Altayech and had one daughter Princess Romanework Haile Sellassie. This was a civil contract marriage, which was a very popular custom in Ethiopia back then, where families would arrange unions between their children before they came of age, for the purpose of making social, economic and political alliances. These civil marriages could be annulled if the families did not wish to renew their contracts. The second type of traditional marriage was conducted by the Tewahedo Orthodox Church when the bride and groom were of consenting age. A civil union was not recognized by the Church. Woyzero Menen also was married under civil contracts three times before She wed Dejazmatch Tafari in the Church. She had four children from those unions. The Church did not recognize Their previous marriages.

On July 27th (or possibly 29th) 1911 at the age of 19 when He was Governor of Harar, Dejazmatch Tafari was legally wed to Woyzero Menen Asfaw (aged 20) in Harar as organized by Her uncle Lidj Iyasu (heir the throne). Their marriage was arranged, but it was a love match. It was observed by Her uncle that She and Tafari, his cousin, had a natural rapport and deep attraction to one another.

For the marriage ceremony Woyzero Menen travelled 45 days to Harar from Addis Abeba to meet Her future husband. Their official marriage followed traditional Tewahedo custom: they were both robed in the “Cloak of unity,” exchanged their wedding bands, anointed with the holy anointing oil and crowns were placed on their heads. Then They took the matrimonial oath and received Their first holy sacrament of Communion as a married couple.

It was believed that an official Ethiopian marriage which was in tuned with the Most High’s will and favour, would be blessed with children, material abundance and a strong spiritual foundation. These three blessings were granted to Emperor Haile Sellassie I and Empress Menen Asfaw throughout Their marriage which lasted over fifty years. They had a home filled with love, peace and adoration abundantly shared among Their six children and many many grandchildren.

Upon the Empress’ passing on Febreuary 15 1962, His Majesty commended Her great spirit and the peaceful union They shared as husband and wife:

“All of you knew her well but she was more intimately known by I. She was devoutly religious and did not lose her faith even in the time of hardship. During the memorable days of Our companionship We never had differences that needed the intervention of others. As Sarah was to Abraham, so was she obedient to I. Our wishes were mutual until we were separated by the Almighty. Her assistance for the good of the young, the old and the needy requires no testimony for they are greater than thoughts and words.
We have been extremely pleased to live long enough in the perfect union that enabled us to see our offspring, our grandchildren and our great grandchildren. We are thankful to the Almighty for having vouchsafed to us that long uninterrupted union which is not very common in the world today: There could be no more profound prayer for I to utter.
In spite of Our utmost efforts efforts to save her life in her time of illness, she was overtaken by the fate of Adam and passed away.”

Sources: The Biography of Empress Menen Asfaw The Mother of the Ethiopian Nation by Anjahli Parnell and www.jah-rastafari.com/ selassie-words/show-jah-word.asp?word_id=pass_menen
Posted by Ila Addis at 09:46