Proposals to Haile Sellassie I from Benito Mussolini 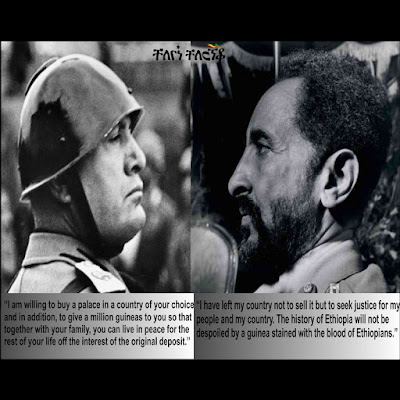 Everyone except Ethiopia agreed that the only way to stop and settle the war between Italy and Ethiopia, was for Ethiopia to give up a large portion of its territory to Italy and be put under a mandate drawn up by the League of Nations. Italy offered the following proposal to settle the war, as quoted from the Emperor’s memoirs:

“To the north, all of Tigray was to be ceded to Italy, Axum and Aseb left to Us; in the east, We were to be given Harer, ceding the surrounding borderland to the British and French. In the south, Bale, Arsi and all the lands between Lake Zwai and Lake Marghereta [Lake Abaya] and all the territories to the west were to be handed over to Italy, while the rest of the country was to be confirmed for Us. The sovereignty over all territories was to be given to Us, but we were to employ administrators and advisors from Italy. Italy tried to tempt us with this arrangement in exchange for several million lire but…was unsuccessful..

Moreover, while We were in exile, Mussolini sent an emissary with a message:

‘I have heard of Your Majesty’s financial predicament. I am willing to buy you a palace in a country of your choice and in addition, to give a million guineas to you so that together with your family, you can live in peace for the rest of your life off the interest of the original deposit. It is because of you that I am unable to obtain recognition for Italy’s claim on Ethiopia. Sign a statement and release your claim over Ethiopia in favor of me.’

We replied, ‘I have left my country not to sell it but to seek justice for my people and my country. This history of Ethiopia will not be despoiled by a guinea stained with the blood of Ethiopians.’

He proposed this idea in March 1937. A year later [Mussolini] made another proposition, saying, ‘I offer you one million pounds and a portion of your country. If you accept the basic idea, we will not be bickering on the division of territories amongst ourselves; we will work the matter out.’

We rejected this offer outright, underscoring that We came to seek justice from a League comprised of fifty-three states and would await their sincere judgment; and the matter was concluded.”