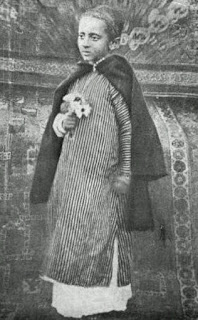 For much of His earlier years, Lidj Tafari was unfortunately cared for by others instead of His own parents, due to the early death of His mother, and the diplomatic obligations of His father to the crown. Ras Makonnen was often away from Harar because of the military or foreign expeditions he was in charge of. This fact of His Majesty’s childhood was likely a source of pain for Him growing up, as most Ethiopian children lived with their parents and immediate family members.

In Ras Makonnen’s absence young Tafari was left in the care of his uncle Fitaurari Haile Selassie Abayneh and his wife Mezlekiya and they became his second parents. From a small child Tafari was raised with their son Imru, whom Tafari considered to be like a twin brother. They were born in the same year. These two remained very close until death parted them in audlthood. This family raised Him and cared for Him in the way that His own parents couldn’t due to death and duty.

Monks of the Roman Catholic Capuchin Mission school (run by Monsignor Taurin and later Abba Jarosseau), were teachers of young Tafari and Imru. At this school they learned alongside the sons of other nobles, in a more European fashion. Jarosseau for Abba Andreas as he was called by the Ethiopians, was a close friend of Ras Makonnen’s and the Ras asked him specifically to be godfather of his son Tafari. The famous picture of young Tafari with a cross, is the picture Abba Andreas had taken to cement this adoption.

Dr. Vitalien taught Tafari French as a child and by ten years He was fluent in the language. The doctor worked at the hospital in Harar and was either from Guadeloupe or Martinique ( I have found sources saying both).

The Ethiopian Catholic priest Abba Samuel became Tafari’s tutor and he taught Him much about the world and the Christian Faith, he was also like guidance counsellor. He probably also helped Him learn Ge’ez and Amharic. He remained close to Tafari until 1915 when he died in a boating accident saving Tafari’s life. Abba Samuel was highly loved and cherished by His Majesty.

When Ras Makonnen did fall ill and was on his deathbed in 1906 he sent a letter to Emperor Menelik II asking him to take his Son under his care at court in Addis Abeba. The Emperor was impressed by teenaged Tafari’s abilities and enrolled Him in the Menelek II School, under the care of the Egyptian Hanna Bey Saleb. There Tafari was groomed to officially take up His post as Dejazmatch.

Sources: The Lion of Judah hath Prevailed by Christine Sandford, King of Kings by Asfa-Wossen Asserate, A Glimpse of Greatness by Abebe Ambatchew
Posted by Ila Addis at 09:19