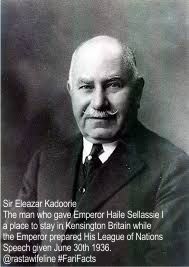 The British Prime Minister Stanley Baldwin, because of public pressure, was forced to grant the Royal Family asylum. He was hesitant however because Britain did not want to provoke Facist Italy and National Socialist Germany, or bring the two countries closer together that they would make an attack. The Emperor was told He could land on British soil incognito. He would not be recognized as an official State Guest.

The Emperor Haile Sellassie I, forced into exile because of the assassination attempts on His life by Benito Mussolini’s armies, disembarked the passenger liner SS Orford at Southhampton, Britain on the 3rd of June 1936.

Sir Elly Kadoorie is the man who gave Emperor Haile Sellassie I refuge when the Emperor first entered Britain. Sir Kadoorie’s house was located in Princes Gate Kensington, very near to the Ethiopian Legation. It was here that the Emperor prepared His speech for the General Assembly of the League of Nations scheduled for June 30th. The House became a diplomatic office for the exiled Emperor.

Eleazer Elly Kadoorie was born in 1867 in Bombay India to an Iraqi Jew from Baghdad. His family migrated to Bombay in the mid-eighteenth century. He went to Shanghai from Bombay in 1880 under the employment of the Sephardi Jewish firm David Sassoon and Sons. When he became wealthy he went into business for himself opening companies in both Shanghai and Hong Kong. He and his brothers became quite wealthy holding many businesses such as banks, plantations, real estate and electrical companies to name a few. He was made an Honorary Knight Commander of the Order of the British Empire in 1926. In 1942 Kadoorie was captured and taken from his home in Shanghai to a foreign civilians prison where he died in 1944. He had a wife Laura and two sons. His grave along with his wife’s are in Shanghai to this day and are open to visitors.
View more information on Wikipedia about the Kadoorie family.Sources: Eleazar Kadoorie Wikipedia and King of Kings by Asfa-Wossen Asserate
Posted by Ila Addis at 16:28