Forced Into Exile: The Council of State Votes 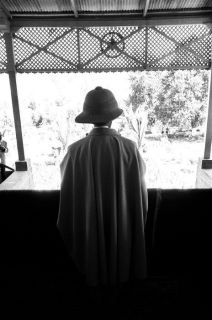 The Emperor Haile Sellassie the First, after fighting Italy on the battlefield from October 1935 to April 30th 1936, was forced into exile. The Ethiopian army was greatly diminished, and could barely stand against the guns, bombs and illegal poison gas used by the larger Italian forces. Totally exhausted, the Emperor finally arrived back in Addis Ababa from His battle in Dessie, on the last day of April, where He went into a closed deliberation with His Council. They needed to decide on the next plan for attack. The Emperor’s intention was to gather His army and strike against the Italians one more time between Harar and Jijiga, to keep them away from Addis Ababa. But because the numbers were so small, and because the Ethiopian government had been refused military aid from Britain, France and other League members, the outcome was viewed as an impossible victory. The Council voted and 21 members voted that the Emperor leave the country while 3 voted that He stay. It was always custom for Emperors to fight to the death, and the 3 including Blatta Tekele, thought He was a coward to forfeit His seat, that He would shame His country. There was one member of the Council who wasn’t present for the vote, he too agreed that the Emperor should stay rather than run away, it wasn’t the Ethiopian Way to back down.

The Emperor agreed, and because He didn’t want to abandon vulnerable Ethiopia, was prepared to fight to the end. But Empress Menen tried Her best to encourage Him to leave, as did His cousin Ras Kassa Asserate. She didn’t want the railroad to close due to the war before the family could reach safety – knowing that the Italians would try to kill Them all. The majority of the Council wanted HIM to leave because they thought Ethiopia stood a better chance if He went personally to the League of Nations and made a plea on the behalf of the country. It was better than having the Monarchy abolished (or an undeserving puppet placed to rule de facto) by Italians, which likely would have happened if He were murdered o captured.

On May 1st Sir Sidney Barton telegraphed the British Foreign Office notifying them that the Emperor was handing over the Council of State and leaving Ethiopia. He requested that a naval ship be sent to Djibouti to meet the Royal Family to take them to Palestine.

The Royal Family, their belongings, their lions, vehicles, their most trusted advisers and diplomats, and some Europeans, all boarded a train to Djibouti in the wee hours of the morning May 2nd 1936. But before the Emperor could officially set sail from Afrika on the 4th of May, He met with Sir Chapman-Andrews at Diredawa, who had been a loyal ally for many years, to ask him if he thought He should go. The Emperor was still undecided, and wanted to find a way to raise an army. Chapman-Andrews encouraged the Emperor to save His life rather than let Italy capture, imprison or assassinate HIM, so the King of Kings reluctantly set sail for Jerusalem.


Sources: Chapman-Andrews and the Emperor by Peter Leslie
Posted by Ila Addis at 15:23